Maison de Lumiere is here to help brilliant entrepreneurs who want to create success on their terms by honourine their intuition as the powerful decision tool.

Ange de Lumiere lost her job in 2005 whilst pregnant with her third baby. As a French lawyer in the United Kingdom, she could not find another job as a lawyer unless she went back to qualify as a solicitor. So she had to reinvent herself. She first trained as a clinical hypnotherapist in 2007 and tried to establish a practice after graduating from the prestigious Clifton Practice, in Bristol, but the 2008 crisis hit the world and people had other priorities.

She opened a practice as a tarot reader at the insistence of her teacher, and started what she describes as her PhD in intuition from the University of life. Although she did not consider herself psychic, Ange’s interest in everything intuitive and psychic came from her grandmother who had “the gift”, but who denied it after she foresaw the death of the husband of a friend of the family.

In 2009, she wrote and published her first book called the Journey of the Slim Soul to offer women who suffered with body image and weight, a path without scales, strenuous exercise and calorie counting. It was a path she walked herself but also knew well from the string of clients that came to her for weight loss in her hypnotherapy practice.  For a few years, she ran an online business coaching people how to write books, but she gave up on this venture when her dad died in March 2014 just as she was launching her first in person writing workshop.

What really motivated Ange to keep going with her business was that she needed to create success on her terms. She knew what success on other people’s terms looked like. When she was a global mergers and acquisitions lawyer, she had to hired au pairs to look after her children so she could keep up with the work load and the traveling. But when she realised that her children were autistic (all four of them), she knew she had to find another way to success that allowed her to be there for her kids the way they needed her to be.

With her husband, they decided to take their son out of school in 2015 to home educated so that his needs could be met as the mainstream education was failing him. This is when Ange took her business online and started thriving. She now home educates her younger two kids and works in her business one day per week.

In 2017, after publishing a memoir about her father’s called My Father Who Art in Heaven, she decided to invest over £8,000 in her intuition in order to bring her skills to mainstream business owners. In the summer of 2018, she started offering business akashic records sessions, which sold like hot cakes.

The challenge Ange is facing is that most business owners do not understand how valuable intuition is for their success, as most of them have had bad experiences with it. Usually it is because they ignored a bad feeling they had about a client or a partner, and paid a high price for it.

So Ange is here to create a revolution in business by putting intuition first. She is passionate about showing entrepreneurs and business owners that they are all intuitive and how to use their intuition to make better decisions in their businesses.

In June 2021, Ange launched a podcast called the Intuitive Revolution in Business, which reached the top 5% global rankings. During the first week of the launch, she interviewed eleven entrepreneurs who shared their stories of intuition.

She knows that the only way we are going to make intuition “normal” is by everyone having the courage to share their stories with others. And this is why Ange interviews a guest every four weeks on her podcast about their stories of intuition. Her guests have included a multi-award winning business coach, a podcast agency owner, a freedom coach, a lawyer, a coach who works with horses, a physiotherapist turned medical intuitive, a business strategist, an inclusion and diversity coach and more.

In September 2021, Ange secured Gay Hendricks, the famous author of the Big Leap and Conscious Loving, as a guest for 2022. As her podcast grows and reaches more people, she wants to have more high profile business owners on her show to make intuition mainstream.

Her ultimate mission is to put intuition on the school curriculum all the way from primary school to Colleges and Universities. And the reason she is so passionate about this is that intuition saved her life.

Most entrepreneurs Ange works and talks with, confide that the business world was already volatile and unpredictable before the pandemic. That is the reason thought and business leaders talk a lot about VUCA: Volatility, Uncertainty, Complexity and Ambiguity, and how to overcome it. The VUCA world has been ramped up a notch since the pandemic and Ange believes that intuition is the answer to that. When the data is no longer helpful and business owners need to navigate uncharted territories, the tool that is going to help them thrive is not old data or strategies but fresh ones that are innovative. Intuition can do just that.

The most successful entrepreneurs credit their intuition as the number one tool that helped them be as successful as they are. This is something that Steve Jobs, Oprah Winfrey and Richard Branson make no secret about. However, none of them teach other entrepreneurs how to do so, because they don’t really understand their intuition that well. They just use it.

As an autistic entrepreneur, Ange’s special interest is intuition and she is on a mission to teach people how to use their intuition to make powerful decisions. Intuition can be taught. Everyone is intuitive at birth and yet none of us have  been taught by our parents or teachers how to use that wonderful gift. And the reason is that they were clueless about it. In fact, it was worse than that, they were told by their own parents and peers that intuition was evil, weird and creepy. The stigma around intuition sadly comes from superstitions and old tales. Nothing could be less true though. Intuition is a wonderful gift we are given at birth that is here not just to keen us safe but to help us find opportunities and create synchronicities. Once you embrace your intuition in business, and as a matter of fact, in all areas of life, everything becomes easier. Everything flows. Opportunities appear as if by magic in your life because you are in tune.

The challenges that COVID has created for the economy are actually a powerful opportunity for entrepreneurs and business owners to do business differently, in a more fluid way. Intuition is going to be the differentiator between those that succeed and those that don’t. In fact, this is already something that has been looked into by the New Jersey Institute for Technology that compared business with intuition and found that 80% of companies that doubled their profit in the five years had executives with above average intuitive skills.

We live in an information technology world that overwhelms us with data. This can actually lead a lot of people into analysis paralysis as data can often be interpreted in opposite ways.

Understanding intuition is something that takes time and dedication, but thanks to Ange’s business, you won’t have to study it for fifteen years the way she has. It will be available to you on demand with four simple steps. These steps include:

On the 18th of November, she launched her third book called the Intuitive Revolution in Business, which is available on her website, in her brand new shop.

The biggest piece of advice Ange has for entrepreneurs, whether aspiring or established, is to commit to understanding their intuition so they can use it in every decision they make. As business owners, we have to make decisions all day long. And having to weigh the pros and cons of every decision is exhausting, not to mention that it can lead to decision fatigue.

Some entrepreneurs that Ange worked with were reluctant to do that because they believed that they would have to leave their business heads behind. Nothing could be further from the truth. Intuition uses your business acumen to help you navigate the market, just like a GPS. The more business acumen and data you have, the more your intuition can work from, so that you blend the two in what Ange calls Intuitive Intelligence. Scientists like Albert Einstein and Nicola Tesla considered it the highest form of intelligence. And although their work wasn’t recognised in their time for the value it brought the world, we are now ready for the Intuitive Revolution.

Will you join Ange? If so, you will embrace a life of ease and flow. Everything will take less time. Opportunities will seem to bump into you. This means you will have more time for your friends and family, your hobbies and your health. As Sarah Cain so eloquently explained in her book Quiet, the Industrial Revolution saw the decline of intuition because it promoted the rein of the persona, instead of character. This meant that people had to pretend to be someone to persuade others to do things. It is time we stop this harmful tendency and revert back to authenticity. Intuition is the tool that will help us do this and stop the crazy race that is making us kill the earth.

As business owners, we owe it to the next generation to create a better world. It starts with us but if we can also benefit the rest of the population, then what do we have to lose?

Latest posts by Nataly Komova (see all)
Share this 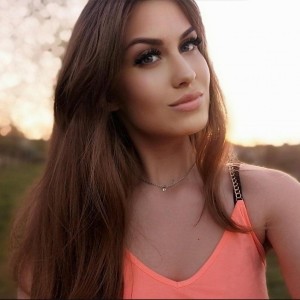 Eye of Love was founded by Alberto Chowaiki in 2012 and is a family run company.

With each passing day, we grow further from the concept of preserving an ecosystem that is

Discovering the World of Fine Jewelry in the Israel Diamond Exchange: An Exploration of Savransky Private Jeweler